I was fortunate to attend a neat event today. It was a #mapjam. The idea is that a bunch of people come together from a local area and begin to map out all the things that are happening in relation to their 'shareable economy'.

I was fortunate to attend a neat event today. It was a #mapjam. The idea is that a bunch of people come together from a local area and begin to map out all the things that are happening in relation to their 'shareable economy'.

I was fortunate to attend a neat event today. It was a #mapjam.

The idea is that a bunch of people come together from a local area and begin to map out all the things that are happening in relation to their ‘shareable economy’. After a string of interesting introductions, speakers and facilitated discussions the group of attendees then set about building a ‘map’ for Canberra. This led to the natural question, “What do we map?”

Having a background in economics, digital markets and open data, I offered the following to try and help answer that question.

The shareable economy, if defined in economic terms, will be based on a market which trades on economic goods. Public goods, such as parks, are a part of this economy. Social goods and goods provided via welfare distribution networks should also be included.

There are many existing networks of entities that already facilitate trade of goods within a shareable economy. The nodes which are important to the logistics of such trade can be identified and mapped. Some benefit may be found via the communication of this network alone. However, additional benefit may emerge when people start to see how existing nodes can be organised to supply new forms of trade.

Public assets which provide a service, even if they are not part of a trade network, should also be mapped as a relevant node within the shareable economy. Examples might include park benches, tables, playgrounds, etc.

Existing networks, such as book sharing clubs, could be mapped. It would be valuable to try and map any event, even if they are peer to peer events rather than group events. If the event does not have a physical location it may still have a temporal location that can be mapped. Or, a little work could be done to map the nodes on either side of the event. For example, a person in Hawker traded with a person in Holder to complete a share event.

There is a lot of data available to help identify the public good’s register of assets. The ACT and Federal Government open data platforms can be used to give us a nice map of assets which create shareable spaces, facilities and services. It is also easy to access the lists of services provided by charitable organisations throughout Canberra, allowing us to pull the data together into central geospatial resource.

I expect this will grow quickly as a number of open datasets were identified and these will be bulk uploaded to the map over the days ahead.

If you are interested in helping to identify, quantify and support Canberra’s shareable economy then please fee free to get in touch with Dr David Pecotic via dp1974 at gmail dot com. 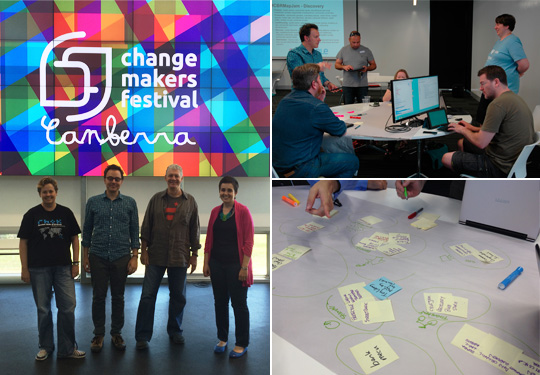